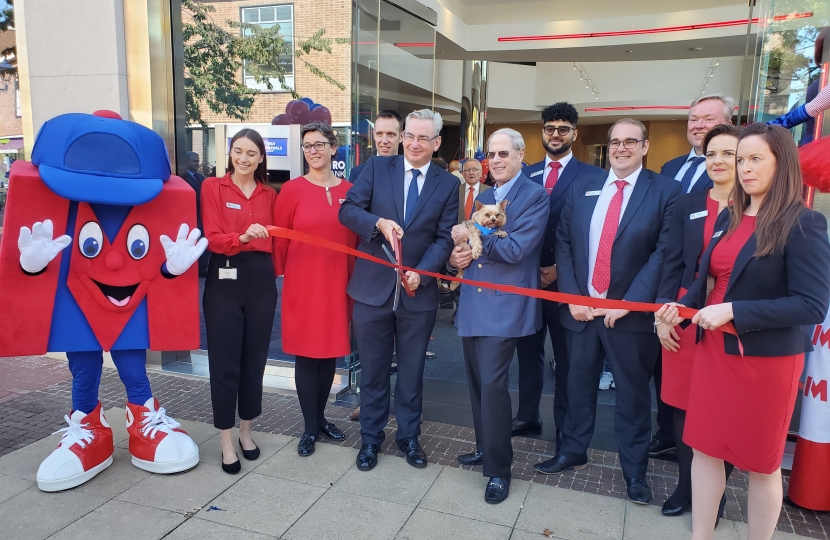 Last week I had the great pleasure of joining Vernon Hill, the founder of Metro Bank, and staff to officially open the bank’s very first branch here in Solihull.

It was great to meet the team who will be running the new bank, and hear more about how they hope to shake up high street banking in town.

Metro Bank has made a name for itself in London by aiming to offer a smoother, more flexible, more modern experience than traditional banks. It was launched by Vernon in 2010, and in less than a decade has grown to more than 60 branches across the country.

I’m always pleased to see new businesses opening their doors in Solihull. This new branch means not only better choice for local residents when it comes to opening a new account – it also means new jobs, and is yet more evidence of the prosperity and growth our town enjoys.

Nor is Metro Bank the only business giving Solihull a facelift. I also stopped into local nightclub Popworld to meet the team and check out their renovations. The whole place has had a complete overhaul and looks great.

The team who showed me round gave me a very warm welcome, and I have no doubt that Popworld will continue to be an important part of Solihull’s night-time economy.

But a town doesn’t just run on big clubs and national chains. Just as important are the independent, locally-owned shops which give any community its distinct character.

However, being a local shop doesn’t mean you can’t deliver nationally-recognised quality, and the Dove House Fish Bar does just that. Last week I was very pleased to join Petro Nicolaides, along with his colleagues Val and Eleni, as their shop received national Quality Assurance Award.

Overseen by the Seafish Awards, this is a countrywide kitemark for excellence. Only 200 shops across the UK have received it, including just four in the West Midlands – and Dove House Fish Bar is the first of those in Solihull!

I’m always keen to hear about, and support, more local business success stories. So if yours is in the running for an award, don’t hesitate to get in touch and let me know.

Originally published in the Solihull Observer, 25/09/19.