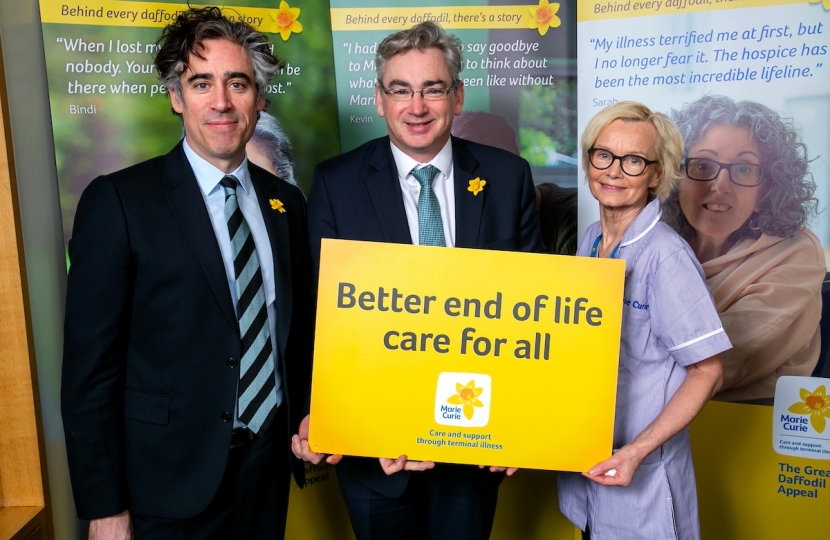 Last week, I had the great pleasure of meeting some of the amazing local people who either work for or volunteer with the Marie Curie hospice.

The occasion was the visit of the Marie Curie Bus, which was parked in Mell Square from Monday to Friday last week. It offered local residents a chance to find out more about Marie Curie’s services providing care and support to people affected by terminal illness, and the charity a welcome opportunity to raise crucial funds for our work and awareness campaigning activities.

Did you miss them? Don’t worry, they will be back this month from Monday 21st to Friday 25th in the same place, from 10am to 4pm every day.

I’m proud to be a longstanding supporter of Marie Curie and their outstanding work. Earlier this year I joined them in Parliament for the launch of the Great Daffodil Appeal, their new fundraising campaign.

Meanwhile in Westminster this week the Government has outlined its programme in a long-overdue Queen’s Speech.

I was very pleased to see that this will include tough new sentencing guidelines for violent and sexual offenders. Earlier this year I spoke in the House of Commons about the shadow that serious violent crime has cast over our community and region and made it very clear that tough action needed to be taken.

The first step was the welcome announcement that the West Midlands is to receive an extra 366 police officers as a result of the Government’s new recruitment drive. But front-line officers need the rest of the criminal justice system to back them up, and this sentencing reform is a vital piece of the puzzle.

Ministers also plan to delay the point at which a prisoner is typically released from prison from halfway through their sentence to two-thirds.

Finally, I know that many residents will welcome the new Telecommunications Infrastructure Bill, which aims to roll-out “gigabit-capable” broadband across the whole UK and stop towns like ours being hobbled by poor connections.