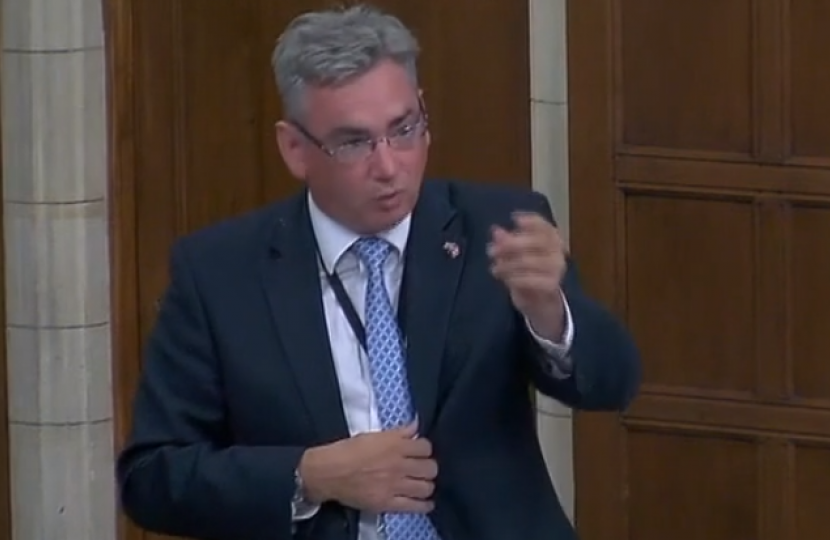 "It is a pleasure to serve under your chairmanship, Mr Hollobone. I congratulate the hon. Member for Crewe and Nantwich (Laura Smith) on securing this important debate. I was heartened by it. I had thought that cross-party working and the recognition that we are all trying to do something in a positive space had been lost to a certain extent, but her speech was incredibly positive in that regard. I am sure the Front-Bench speaker, the hon. Member for Birmingham, Erdington (Jack Dromey), will reflect that later. I also want to say that the speech by my hon. Friend the Member for East Renfrewshire (Paul Masterton) was the speech I wanted to give. We have just been discussing that. It was absolutely top drawer and very thoughtful.

"My career as a financial journalist spanned what I would call the sharp decline of private workplace DB schemes. I remember all too well speaking to people at the Allied Steel and Wire steelworks in Cardiff, who had effectively lost their pensions when their company was wound up almost overnight. The same was true for Maersk, probably one of the worst examples of corporate acts in this country in the last generation. Under the laws at the time, retired members were understandably ​protected first, which meant that those who were even just a few weeks from retirement ended up with virtually nothing. I can remember the heartbreak in their voices.

"That decline comes from many issues. In that instance, it came from poor company governance and the fact that the economics of DB schemes have been fundamentally undermined over time through demographics and investment returns. Frankly, for the last 15 years, DB schemes have been effectively dead in terms of new members for the private sector. They have existed in the public sector and have morphed and developed over time—we will see how that goes and whether the current models are sustainable.

"In response to those issues at Maersk and ASW, we had the Pensions Act 2004, which helped to set up the PPF. Mr Rubenstein’s management of that has been pretty exceptional. The PPF has been well managed, but frankly it can take only so much. A lifeboat can take only so many passengers. The difficulty is, as my hon. Friend the Member for East Renfrewshire noted, that 3 million members face potentially only a 50% chance of having their pension. The more we load into a lifeboat and the greater the burden on other funds, the more likely they are to collapse in turn.

"We need a longer-term solution, and we need to focus on the 2,000 schemes with fewer than 100 members. I believe conversion is a good idea. However, I take the point of the hon. Member for Crewe and Nantwich that perhaps the current models of conversion, which to a certain extent are zombie funds, are not the way we want to go. What we need is to transfer to scale, so that the returns come through back office. More than that, potentially, there is my big idea—I have written to the Minister about this before and he will not be particularly surprised that I mention it—of rebasing some work-based pensions over time, so that we end up putting everything on a sustainable footing. We could also adapt schemes to the modern world in terms of spousal pensions and, I would suggest, the potential provision of social care.

"The tail is wagging the dog. We have a statutory architecture built for a system where people had jobs for life and DB schemes were ongoing entities. For increasing numbers of schemes, retired and deferred members far outweigh active members. Employers are not members, and members are not employees. In that context, the direct link between the employer and the scheme makes diminishing sense. Of the £80 billion or so paid into workplace pensions, around three quarters of which is in respect of DB schemes, nearly half goes to the public sector, yet active membership of DB schemes is now down to just 7 million workers and is falling daily.

"We need to break the link. First, we should establish a universal benefit structure, or a kind of common denominator pension, based on a common structure—for example, a one-sixtieth or one-eightieth scheme, with 50% spousal pension and consumer prices index inflation-proofing up to 5%. We would then go through the time-consuming and laborious process of valuing existing DB schemes by reference to that universal scheme on an actuarially neutral basis. For example, in my 20s I contributed a negligible amount into a final salary pension scheme on a one-fiftieth accrual basis. As a result, I was guaranteed a pension of nearly £4,000, with RPI and a two-thirds widow’s pension. The scheme is now in the PPF, but that is because the promises were far too great for the contribution levels.​

"It would have been better if, at an earlier stage, those considerable benefits had been converted to, say, a £5,000 pension in a new scheme. People would not lose their pension initially, and hopefully not at all. Instead, it would be simplified and moved on to a surer footing. That is one point for the hon. Member for Crewe and Nantwich, who talked about consolidation schemes. We could invest in very large schemes indeed. Some of the governance in some of the smaller schemes with fewer than 100 members is frankly very amateur. It is pitiful and almost mothballed.

"If we were to have larger schemes, privately run by something such as a type of National Employment Savings Trust, with Government involvement on the board and oversight by regulators, we could move to a situation where we all feel more invested and know exactly what we are getting. Crucially, we could rebase to enable us to provide better futures for spouses.

"Another area I will mention is that we could offer a social care option. If I had a very large scheme involving maybe 500,000 to 1 million members, I would have the scale to offer a social care option. I could say to someone, “At the moment you will get a pension of £10,000 per year. What we will do is to give you a pension of £8,000 per year, but we will invest through our scheme, because we have scale and can do so.”

"I apologise. We were so rudely interrupted by the Liberal Democrats.

"I conclude by saying that the Green Paper and White Paper were refreshing and thoughtful. We have an opportunity to do something that the Turner report did not do - it dealt mostly with public finances and the state pension - which is to shift the balance and the focus on to private sector workplace pension schemes. We need them to play a role, but we also need to repair the problems of the past."