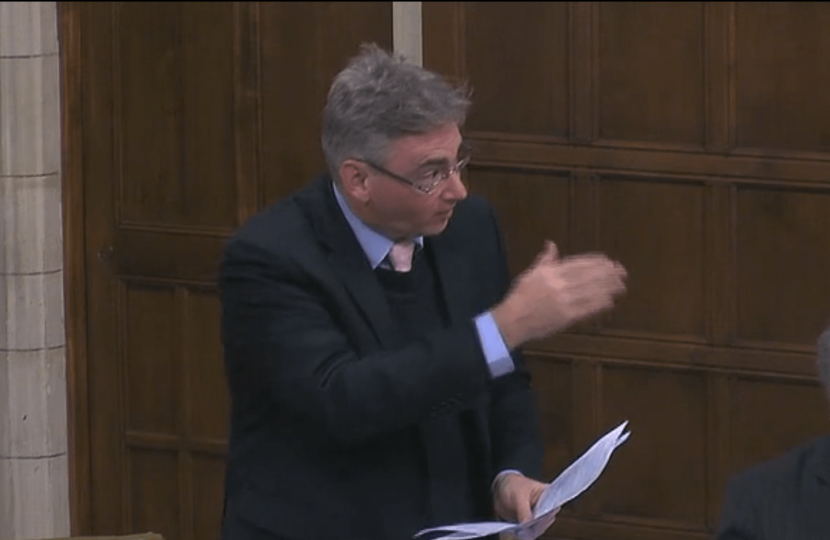 "It is a great pleasure to serve under your chairmanship, Mr Davies; I apologise for arriving two or three minutes late for the debate. I congratulate my right hon. Friend the Member for Hemel Hempstead (Sir Mike Penning) on securing this important debate and bringing his expertise to bear.

"Upholding the rule of law is one of the fundamental duties of any Government. It is essential that every citizen knows that the law is on their side and that ​public safety is the top priority. Solihull has recently experienced a rise in crime, especially so-called acquisitive crimes such as aggravated burglaries, car crime and carjacking. Although our community is a safe and friendly one, we face a real challenge of criminals driving into Solihull from elsewhere in the west midlands. I have heard it said in many parts of my constituency there is frankly a loss of faith in the criminal justice system at this time, facing this rise in crime and also perhaps in seeing some of the sentences handed out.

"An excessively lenient sentence lets down not only the victim of the original crime but everybody put at risk when somebody is left on the streets who should be behind bars. Indeed, a short sentence can be the worst of all possible worlds, exposing the convict to hardened criminals and imbuing them to a life of crime, without serving as a proper, efficient deterrent.

"Of course, an independent judiciary is the foundation stone of our justice system, and rightly so, but the law is laid down by Parliament and, through Parliament, by the people. It is therefore right that mechanisms such as the unduly lenient sentence scheme exist to allow the Attorney General’s Office to intervene where sentences do not properly reflect the strength of public feeling about a particular crime.

"I echo the views of hon. Members about the much wider scope. Let us take one example. One area talks about “some serious fraud”. How do we decide how much of something is serious fraud? Is it about the impact on the individual or just about the scale in monetary terms? What about an old lady who will not answer her door or answer any correspondence and becomes a recluse because of what she has suffered? She may have been through a small financial theft or fraud—perhaps a few hundred pounds—but that has a significant impact on her life. How do we decide on the seriousness in those respects? The system needs to be tidied up and based on more clarity, with better openness for the public so that they can regain and boost their confidence in the judicial system.

"As my right hon. Friend the Member for Hemel Hempstead suggested, the 28-day period for appeal seems arbitrary. Although I realise there has to be an end date, it should not be scuppered by reporting restrictions. It seems obtuse in many regards that we have a situation where criminals are effectively beyond the reach of the system because of something put in place potentially to protect victims.

"I hope that the message from this debate is loud and clear: although the system is welcome, and the Attorney General’s work in it is to be praised, I passionately believe that we need to look at this again and see how we can amend the definitions and improve the system to bring about greater confidence. In many respects, unduly lenient sentences need to be clamped down upon as soon as they occur. That sends a message to the judiciary as well: that the public have frankly had enough of unduly lenient sentences and it needs to act."