Speech: The BBC must do more to represent regions like the West Midlands 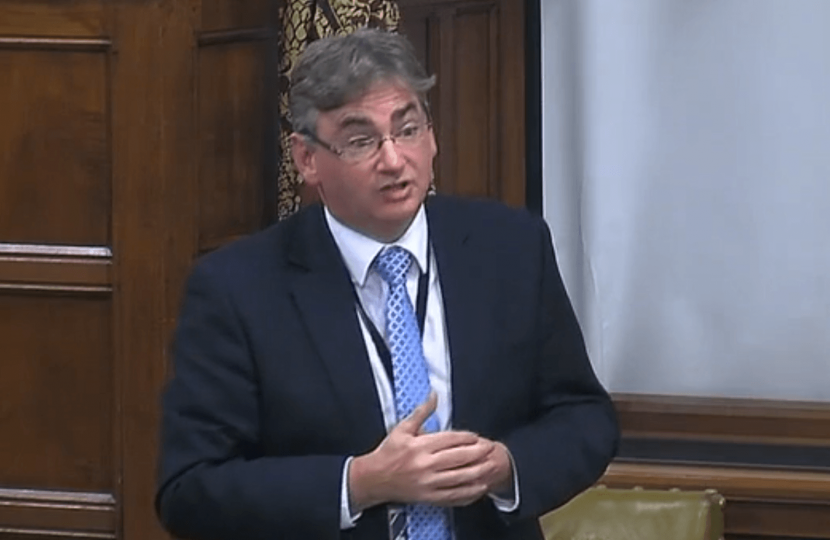 "It is a great pleasure to serve under your chairmanship, Mrs Moon. Thank you for your forbearance; I was playing a bit of hokey cokey when it came to whether to speak. I congratulate Helen Jones on a good-natured debate rooted in her top-class opening speech, which elaborated on the benefits of the BBC to this country.

"I spent five joyous years at BBC News, working in the economic and business centre. The hon. Lady mentioned diversity; I met some of the best and most intelligent people—people whom I consider lifelong friends—in that place, and it was an absolutely fantastic experience, but it was not perhaps the most diverse of places. My name is Julian. That name was quite unusual on my council estate in the north of England, in Chester; I am named after a Catholic saint. I had never met another Julian until I got to the BBC, and when I got there, it turned out that there were five of them working on my floor. I was like a meerkat every time I heard the name “Julian”; it was so unusual to hear that I would look up.

"It was probably not the most diverse of places, but my word, what a superb repository of talent. We see that in the international respect in which the BBC is held. It is known around the world. When one travels around the world and sees other TV, radio and media offerings, one sees that the BBC is absolutely first-class. We have all mentioned programmes that we believe are worth the licence fee; mine, personally, is “Test Match Special”. Do not tell the BBC, but I would pay double the licence fee for it.

"The BBC is an absolutely fantastic institution. If, as a result of this debate, we were to abolish the licence fee, hamstringing the BBC at a stroke, it would be nothing short of an act of cultural vandalism and would have enormous effects on the GDP and cultural aspects of this country, damaging our reputation. If we considered doing that, we would be making a serious error.

"Over the past 20 years, the BBC has moved successfully from being a medium-sized European broadcaster—it is difficult to think of it in that way—to being a genuine global player among the top two or three in news media, content production and branding. It has done so through the expansion undertaken by Greg Dyke, with the tacit support of the Labour party, then in government. That involved a major expansion of the cost of the licence fee; I think that it was above inflation. It was a deliberate policy. The BBC launched new channels and new means of expression, using the licence fee to stake out new territory seemingly on a daily basis. That has led to its huge global success.

"It has had other, less positive impacts as well. I am thinking of the BBC News website, which we must agree is in many respects excellent in content, but which has at times had a devastating effect on the commercial sector. We do not know how strong and vibrant an online commercial news offering we would have if not for the BBC. The Guardian website gives us a bit of an idea. In the late 1990s and early 2000s, The Guardian was a massive player in that space, and although it is still a major player, it has perhaps not grown to the extent that it would have if it had not been for the enormous impact of the BBC News website.

"I come from Chester originally, but I represent the west midlands and live happily in my constituency of Solihull. In the west midlands, we have seen another impact of the BBC’s major expansion as it has become a bipolar organisation between London and Media City in Manchester. Although Media City can be deemed a success as a cluster of production, it has drawn away the financing and investment that we used to see in the nations and regions. Growing up, I remember a BBC news studio in Chester on Lower Bridge Street, which Christian Matheson spoke well about. Bob Smithies used to offer his pearls of wisdom, and we got regional and very local news. The impact of the bipolar BBC is that in the west midlands, for example, we get £12.50 from every licence fee, so we feel disenfranchised. Many parts of the country feel like that, which is why we are pushing so strongly for the relocation of Channel 4, to help bring back the essence of regional diversity and rootedness in our communities that the BBC has lost to a certain extent as part of the drive to scale up, which it had to do to achieve its goals.

"On the licence fee itself, Alan Brown referred to a pretty ominous and unpleasant letter. If Capita is sending out such letters, that is poor form. We should also look at the fact that people effectively have to pay their direct debit six months in advance, which is a disincentive for them to sign up. Often, direct debits are the best way for people on lower incomes to budget. I know that system is effectively set by parliamentary statute, but I have always thought that it is a negative.

"The hon. Member for Warrington North responded to the point about licence fee prosecution, but it is not quite the same as not prosecuting other crimes. There is a huge backlog in court time for rulings. It is another negative—a real downside—but, frankly, I cannot see any other way of doing it without abandoning prosecution full stop and decriminalising the offence, which would be a mistake at this stage. We should try to find quicker and more efficient means by which to bring about the result we all want—people paying what they are asked to pay on time or having a sympathetic hearing if they cannot manage to pay that sum.

"BBC bias has been mentioned today. I have never believed that anyone has a meeting at the BBC and says, “We are going to be biased today”. No one ever does that. It is below the line—it is a cultural thing, because there are people with similar mindsets and from similar backgrounds. I remember in news meetings being struck that the two newspapers on offer were The Guardian and the Financial Times, and that was it. They were the news sources and leads for the day. I did not ever quite get the idea of story generation coming from a newspaper; it seemed behind the times, particularly in a 24-hour news environment. The hon. Member for City of Chester said the BBC was “full of lefties”, but there were some right wingers, some Tories, in there—I was one. We had to keep it rather quiet and sometimes meet by the coffee machines to whisper our disapproval at certain news lines.

"There is a real longer-term difficulty with BBC impartiality, which it is reviewing right now as part of its producer guidelines. It is important that it does not over-editorialise and bring in too much comment. We have seen the way that it is trying to reach out, and many of the accidents that happen come from that effort, for example the appearance of “The Canary” on “Question Time”. I found the disgraceful story about Laura Kuenssberg that followed deeply alarming and unpleasant, and I raised it on the Floor of the House.

"There is also what I call the “despite Brexit” coverage of economics stories. That does not come from people thinking that they need to do whatever they can to frustrate the will of the British people—that is not the way it has been thought about. Many people in the organisation felt a certain way about the referendum. Quite rightly, they realised that they needed to double down on impartiality at election and referendum times, as my hon. Friend Huw Merriman mentioned, particularly after the criticism that they had following the Scottish referendum. They made a point of being utterly straight. I think many felt a sort of collective guilt that at the time of the referendum, they could have explained the difficulties that would ensue from areas such as our trading relationships or the differences between the single market, the customs union and things such as European Free Trade Association, but did not explain them enough. That guilt came across in the “despite Brexit” coverage that we had for several months. I have seen a bit of a turning of the dial on that recently. From conversations I have had with people at the BBC, I think they were aware that it was happening but they did not quite know how to pull it back. They have done so now, and it has improved considerably.

"The wasting of the licence fee on multiple broadcasts has been mentioned. There is a degree of competition at the BBC. The opponents are never Sky News but the 1 o’clock, 6 o’clock and 10 o’clock news. When the people there are at their desks, all they have on is their own news channel. It is amazing, but they do not watch the other side, they watch their own side and compete in that way. That is why we end up with stories of three or four different news gathering operations going out to the same parts of the world.

"I welcome Ofcom oversight. People in the BBC will feel uncomfortable at the culture shock, but they will also welcome it—it will bed down. Ofcom may be too big an institution—too big a quango, now—but the BBC can have a positive relationship with it. There will be bumps in the road, but it can do it. Let us monitor that closely and see where it goes.

"Is the licence fee, that guaranteed form of income, holding the BBC back to an extent? There are things that can be made commercially for the BBC. For instance, what a fantastic back catalogue it has. Is that being exploited to the extent that it could be? In 2003, the BBC looked at putting it online almost universally and offering it free to use. That was under Ashley Highfield, who was also involved in the iPlayer. The back catalogue is a huge source of potential wealth for the BBC that can be effectively rebated to licence fee payers down the line for better investment. There is an idea of “iPlayer plus”, which would have a subscription element if someone wanted extra services.

"As we come to the break point in the current charter very shortly, we should look at how the BBC is exploiting such commercial revenues. Is it getting ready for the challenge ahead? That challenge, as has been mentioned, is that very few people are consuming their news and broadcast media in the traditional way that perhaps we in this room do. That will hole the BBC below the water line. I want a BBC that is ongoing, strong and unafraid, and that is beginning to adapt to those changes at a pace that will allow it to reduce its reliance on the licence fee over time. The reality is that we are moving away from that model, whether we like it or not."