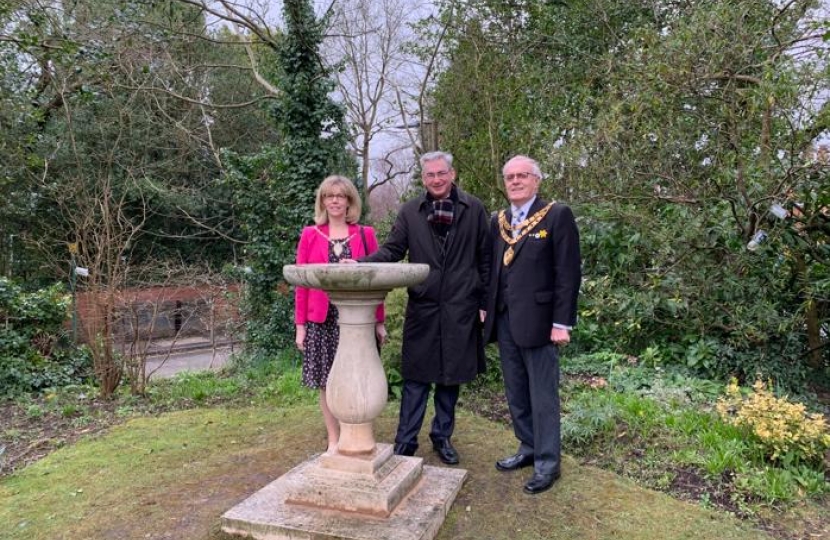 Julian Knight MP has praised the work of local residents who came together to organise the celebrations to commemorate one of Solihull’s most famous residents.

Saturday 7th of March saw Julian join local civic leaders, artists, and scores of local people at a range of events organised to mark the ‘centenary day’ of Edith Holden, the local teacher and nature writer whose Country Diary of an Edwardian Lady was a national best-seller when it was finally published in the 1970s.

Alongside a range of artistic and cultural events, the day saw the unveiling of two new additions to Olton’s environment: a new ‘micro-garden’, created by volunteers on a patch of overgrown waste ground, and a very impressive sculpture of an owl which was carved from a tree stump on Kineton Green Road by noted artist Robot Cossey.

A huge commemorative bird bath, which originally stood in the garden of Holden’s old home on the same street, was also unveiled at its new home in St Margaret’s Churchyard.

“These celebrations have really exhibited so much of what makes Solihull special, past and present. Edith Holden’s book really helped to put our town on the tourist trail, and a pioneer in the cause of protecting the environment.

“These events were not only a fitting tribute to an extraordinary woman, but a fitting testament to the thriving culture of volunteering and community effort which I have seen time and again in my role as MP.”