Local MP leads debate on fighting back against fraudsters 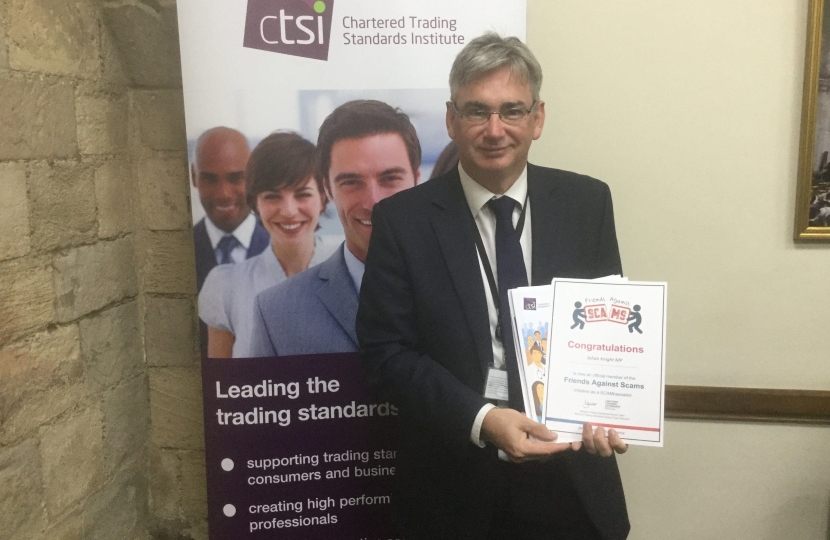 Julian Knight MP gave the opening speech of a debate on protecting vulnerable citizens against fraud, one of Parliament’s first items of business in the new session.

Solihull has an older population and is particularly badly affected: the average cost of scams in our constituency is nine times the national average, at almost £9,600.

As a former consumer rights and personal finance journalist, Julian has seen the financial and human costs that scam artists can inflict on people, and wants to put his experience and expertise to use by helping Parliament to create a more effective anti-fraud programme.

According to the Chartered Trading Standards Institute, the annual costs of scams to the UK economy is an astonishing £52 billion, with an average cost per victim of more than £1,000.

It can also have social effects equivalent to that of violent crime: according to research by trueCall, falling victim to scammers can induce post-traumatic stress, increase “unexplained hospital admissions”, and exacerbate existing health conditions.

“The financial and human costs of fraud can be extraordinary: not only are victims often left very seriously out of pocket, but the associated stress and loss of confidence can lead to a wide range of very negative social effects too.

“I hope that Thursday’s debate will mark the start of a new, energetic, and effective effort by politicians to help crack down on fraudsters and offer better protection to vulnerable people. I look forward to working with ministers, and my friends and colleagues in Parliament, to make that happen.”

Commenting on the debate, Ben Wallace, the Minister for Security, said:

“I congratulate my honourable Friend on the leadership that he has shown on not only fraud but consumer rights in ensuring that the vulnerable in society are not taken advantage of.”