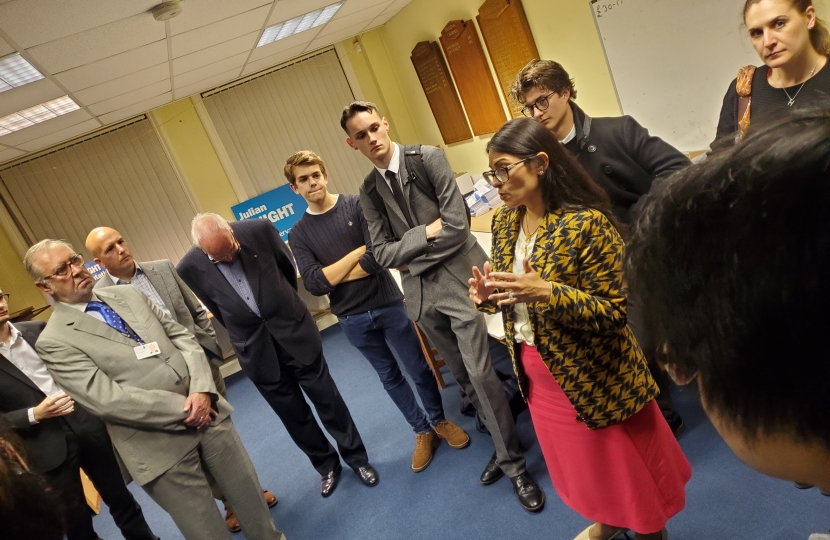 Julian Knight MP was very pleased that Priti Patel has endorsed his campaign to save Solihull Police Station during a meeting in Solihull this week.

The Home Secretary is the latest senior Government minister to visit the constituency after Boris Johnson, the Prime Minister, a few weeks previously.

She was joined by Jay Singh-Sohal, the Conservative candidate for West Midlands Police and Crime Commissioner, who has also pledged his support to Julian’s long-running fight to protect Solihull’s last police station from closure.

In an address to local party members, Patel reiterated the Government’s plans to improve policing, including the recent announcement of funding to recruit an extra 20,000 officers alongside cash boosts for prisons and the Crown Prosecution Service.

She also confirmed that ministers were pushing ahead with plans to abolish and replace Labour’s unfair school funding formula, which has seen Solihull schools placed at a financial disadvantage compared to those in nearby Birmingham.

“I’m delighted that the Home Secretary has backed my campaign to protect Solihull Police Station. Opposition to the current Commissioner’s short-sighted closure plans is growing by the day – it is now past time that he thought again and abandoned them altogether.

“Local parents and teachers will also be delighted to have fresh confirmation that we are getting on with introducing fairer funding for local schools, so soon after the Education Secretary confirmed that more than 20 of them will be getting a cash boost this year.”