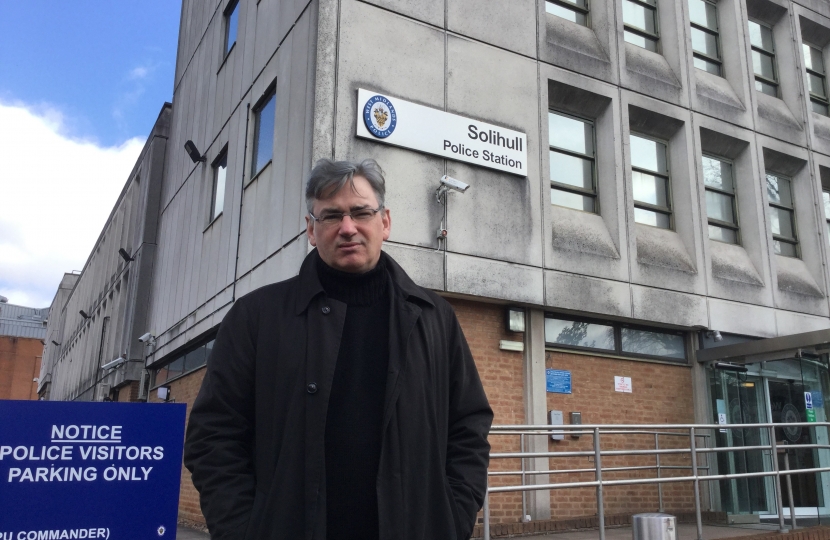 The PCC has claimed that stations slated for closure in both Solihull and Sutton Coldfield will not be closed until replacements have been found.

But Knight, who recently joined Conservative PCC candidate Jay Singh-Sohal’s ‘100 days to save Solihull Police Station’ campaign, attacked Jamieson’s effort to conflate a ‘front desk’ with a proper police base.

Responding to the PCC’s claim that both stations were largely empty, Knight argued that this simply illustrated how Solihull’s police presence had been allowed to run down, even as the Commissioner continues to sit on huge cash reserves.

“The Commissioner is taking my constituents for fools. I have been fighting to save Solihull Police Station for years, and now he wheels out these promises just a few months before the election. It is simply not credible.

“As I have said time and again, a ‘front desk’ is not an adequate replacement for a fully-staffed police station, especially not in a growing town like Solihull which was until recently served by two.

“Residents here want real community-based policing, not to be left reliant on a Birmingham-based ‘flying squad’. It is unacceptable that the current PCC is presiding over a system where stations in outlying boroughs are half-empty whilst more central ones are protected, and these last-minute promises can’t disguise that.

“It’s clear that the only way to secure a long-term future for Solihull Police Station is to elect Jay Singh-Sohal as our next Police & Crime Commissioner.”