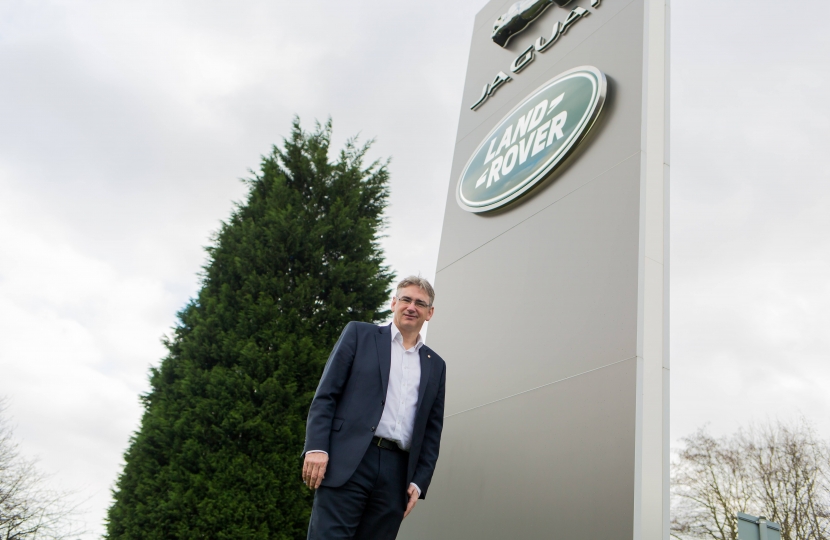 Local MP Julian Knight is delighted to join a new organisation which will bring together politicians from across the region with the management of Jaguar Land Rover and other interested parties.

The new Jaguar Land Rover Development Partnership is being launched by Andy Street, the Mayor of the West Midlands, and Greg Clark, the Secretary of State for Business. It will allow representatives of JLR, the trades unions, professional bodies, and smaller companies in the supply chain to raise concerns directly with decision-makers in the Mayor’s office and Westminster.

Beyond the Development Partnership, Julian is continuing to press the Government to adopt the practical, common-sense policies needed to support Jaguar Land Rover and protect the thousands of local jobs which depend on their Lode Lane plant.

On Tuesday 8th January he held a face-to-face meeting with the Chancellor, Philip Hammond, to argue for a new regulatory regime which differentiated between modern ‘clean diesel’ engines such as those manufactured in Solihull and older, high-polluting models, and on Wednesday 16th he will be opening a special Westminster debate on this important subject.

“I am delighted to be part of this next big step forward for car making in Solihull. Coming on top of hundreds of millions of pounds of investment in the sector nationally, this is a clear sign that we are serious about addressing the specific challenges facing Jaguar Land Rover.

“Beyond the Development Forum I will continue to use my position in Westminster to press for the sensible, practical policies which will give JLR the confidence and stability they need to invest in Solihull and keep our town at the forefront of Britain’s exporting trade.”