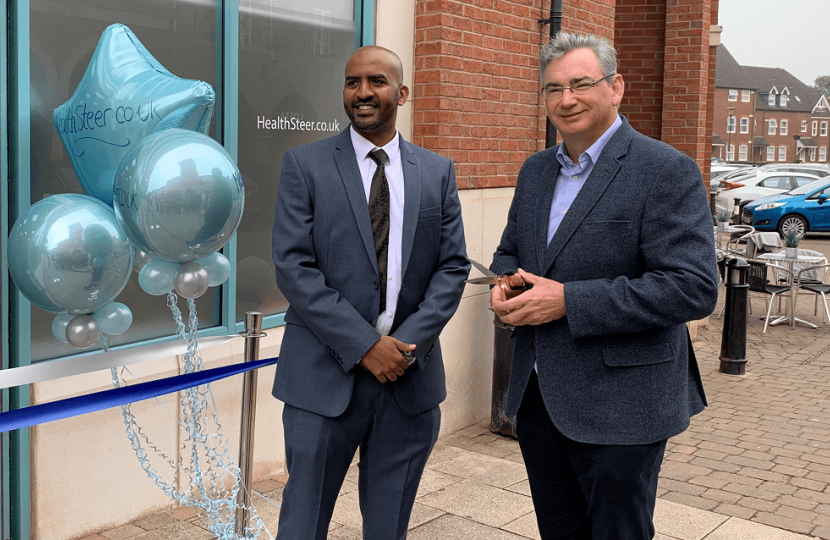 This week, I was very interested to attend the public launch of HealthSteer, a brand-new health service based here in Solihull.

I was given the honour of cutting the ribbon, as well as the chance to say a few words. We also heard from Mohammed Ahmed (better known as Moe), the founder of the company, and Dr Richard Law, one of the doctors involved in the service.

So, what is HealthSteer? In short, it’s an online portal that allows users to connect with doctors in a wide variety of specialisms via the internet, via Skype or another platform.

This has the potential to make these experts much more accessible, both by increasing the number of patients they can see via efficient video consultations and reducing the barriers that distance and time can pose for busy or less-mobile people.

As I outlined in my speech, it is great to see businesses such as this basing themselves in Solihull. We are already one of the UK’s most global-facing towns, with a strong export profile and worldwide reach.

I’m delighted to see our town establishing itself in cutting edge sectors, such as health and technology, which will only grow more important in the decades ahead. It is already a booming market in places such as China.

HealthSteer is a real local story. Moe grew up in the area and studied at Warwick, and I also saw many local financiers at the launch. Local capital, investing in locally-run businesses – that’s an economy we can all get behind.

But companies like this are more than just a boost for our community. They also offer an important, perhaps vital, path forwards for the health services we all rely on.

A new generation of private companies are bringing the very latest technological advancements and using them to find ways to improve healthcare for everyone. Not by competing with or trying to replace the NHS, but by collaborating with it and complimenting it.

Some people get a bit dogmatic about excluding the private sector from our healthcare system. But the precious thing about the NHS is that it’s free for everyone. If private firms can make it better for all, so much the better.

Originally published in the Solihull Mail, 27/06/19