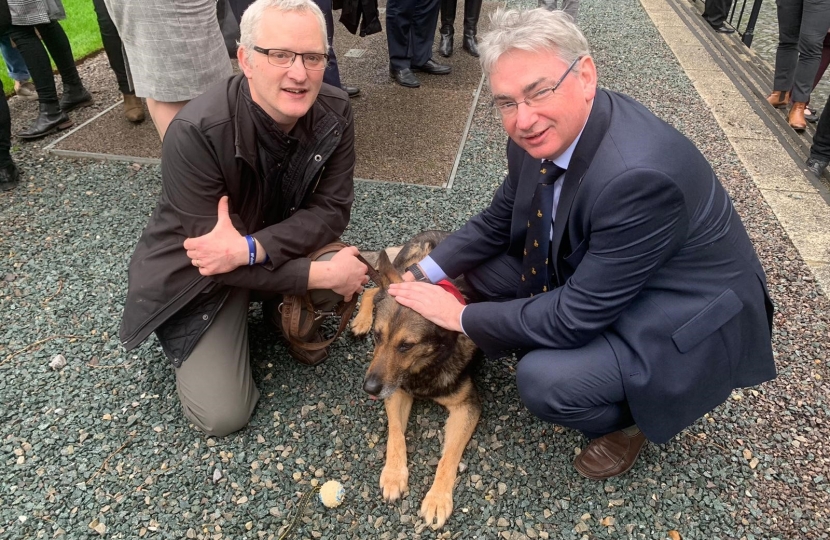 This week I had the pleasure of meeting Finn, the heroic police dog at the heart of the campaign to introduce tougher sentences for animal cruelty.

With the help of his handler, PC David Wardell, Finn became the inspiration for ‘Finn’s Law’ after he was attacked in the line of duty.

Formally known as the Animal Welfare (Service Animals) Bill 2019, this vital piece of legislation strengthened the legal protections afforded to service animals as well as reducing the scope for those accused of cruelty to animals to plead self-defence and fear of attack.

Not content with that, Finn and Dave were back in Parliament to call for progress on the Animal Welfare (Sentencing) Bill. This will amend previous legislation to introduce longer sentences for those criminals who abuse not just service animals, but any animal. I was very proud to pledge my support.

I believe very strongly that we have a duty to look after those who do so much to look after us. That’s why I have always striven to be a champion of servicemen and women in Parliament, backing policies which support veterans and standing up to ‘tank-chasing’ lawyers who try to profit from harassing them.

In the last Parliament I also gave my full backing to the private member’s bill which eventually became the Assaults on Emergency Workers (Offences) Act 2018. This law defined new offences around attacks on emergency service and public sector personnel, as well as new sentences.

Whether it’s being first on the scene after a terror attack to working day and night to protect communities at risk of flooding, our armed and emergency service workers do an extraordinary job. I’m very pleased that since the election has shown a renewed commitment to putting public safety first – and recognition that this requires a fair deal for police officers, soldiers, NHS staff, and more.

All this just makes it even less acceptable that our own Police & Crime Commissioner insists on pressing ahead with plans to close our police station and replace it with a ‘front desk’. An officer in the library is not an adequate police presence for a growing town like Solihull. Both police and public deserve better.