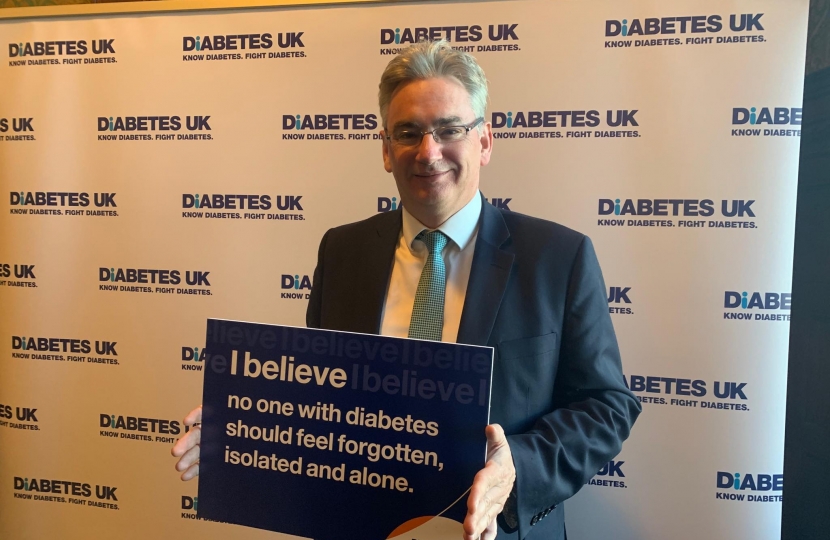 Last Tuesday, I joined many parliamentary colleagues at a special reception organised by Diabetes UK to show my support for their new campaign.

They are calling for the establishment of new, national standards for the emotional and mental health support offered to diabetes suffers.

Recently published research from the charity revealed that the relentless nature of diabetes can impact people’s emotional wellbeing and mental health, ranging from day-to-day frustration and low mood, to specific psychological and mental health difficulties such as clinical depression and anxiety.

Diabetes UK want the NHS to make sure that everybody receives the joined-up care they need for every dimension of their condition, and I’m proud to offer my support.

I have also read much lately of residents concerned about the issue of the netting of trees and hedgerows. As regular readers will know, I want to protect wildlife and enhance our natural landscape. Whilst I welcome a recent open letter to developers from the Secretary of State for Housing, Communities and Local Government, I think that we must go further.

I think that in many occasions these nets are misused to prevent birds from nesting, and think that they should be banned.

As well, I welcome announced plans from the Government which would require developers to deliver a 'biodiversity net gain' - meaning wildlife habitats must be left in a measurably better state than they were before any development started.

Finally, last week I spoke in a parliamentary debate on the Government’s new Serious Violence Strategy. This is a very welcome initiative, backed by tens of millions of pounds in new funding from the Home Office.

Here in the West Midlands we have an acute interest – our region has some of the highest per-capita knife crime rates in the country, and both knife and gun crime have seen serious increases in recent years.

But as I told MPs, you can’t win this fight from Whitehall. It will need close cooperation from other groups and a strong front-line police presence. That’s why I once again urged David Jamieson, our Police and Crime Commissioner, to reconsider his plans to close Solihull Police Station.

Originally published in the Solihull Observer, 23/05/19.