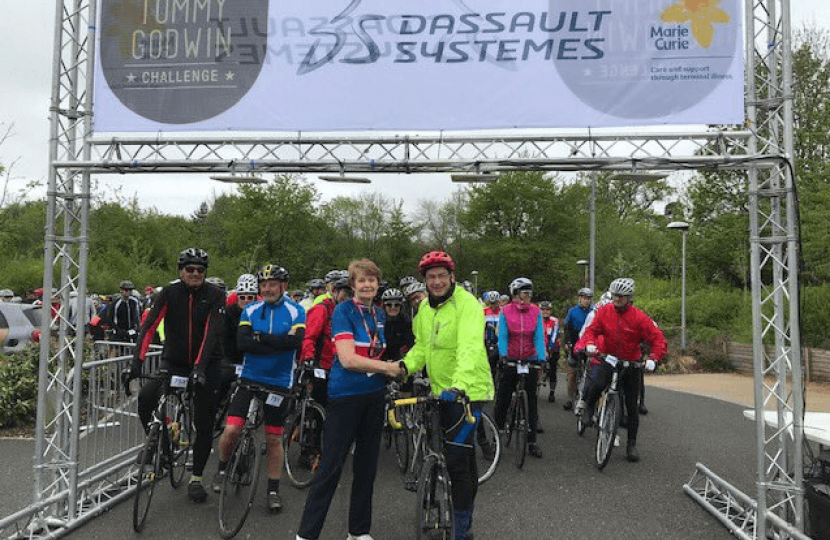 A couple of weeks ago, I had the huge privilege of being on the starting line of the 2019 Tommy Godwin Sportive.

This event was set up in 2013 to celebrate the local sporting legend and raise money for Marie Curie’s services in the West Midlands.

It had already been a huge success, with over £60,000 raised. But this year everyone raised the bar, with a truly astonishing total of over £33,000. This is a tribute to the outstanding efforts put in by the organisers, as well as the sponsors, marshals, and other volunteers who made it all possible – not to mention the cyclists!

Entrants had the option of choosing between three different routes of 30km, 73km, and 100km, so there was something here for people with a huge range of different abilities.

As some of you may know, I’m a keen cyclist myself, and a few years ago I raised money for Marie Curie’s local hospice by doing my own sponsored cycle from it to their original one in London. It was really great to see so many people from across the West Midlands taking part – I never cease to be impressed by just how much people in Solihull give back to our community through volunteering and fundraising.

In case you’re unfamiliar with Tommy, he was a true giant of British cycling. After a promising career was interrupted by the Second World War, he took two bronzes at the 1948 Olympic Games in London.

He then went on coach the British cycling team – becoming our country’s first ever paid, professional coach – as well as President of the British Cycling Federation and our own Solihull Cycling Club. He helped to train a whole generation of British cyclists, as well as running a Birmingham cycle shop.

Some of you might remember him from the 2012 Olympics, when he carried the Torch for 300 metres on the Solihull section of its route. He passed away in the Marie Curie hospice just four months later.

The Sportive such a brilliant way of both honouring this champion sportsman and supporting those who looked after him in his final years, and I’m sure it will only go from strength to strength.