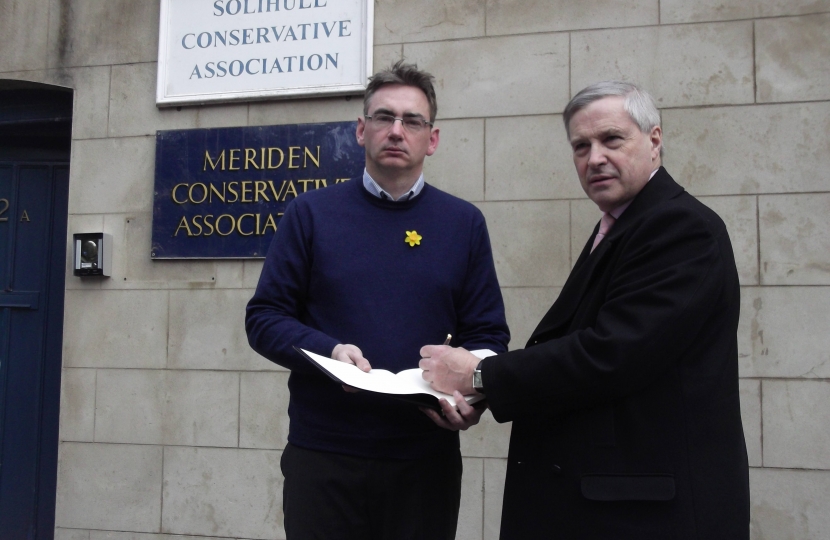 Solihull Borough Conservatives were saddened to hear of the death of former Prime Minister Margaret Thatcher on Monday.

Since the sad news, people have approached the Conservative Headquarters situated on Manor Road, Solihull, to express their condolences.

A book of condolences has been opened by Cllr Robert Hulland, the Chairman of Solihull Conservatives and Julian Knight, Parliamentary Candidate for Solihull and is available during office hours - 9am to 5pm, Monday to Friday.

The condolence book will give Silhillians - whether they are Conservatives supporters or not - the chance to show their appreciation for what Margaret Thatcher did for Solihull and for this country.

Councillor Robert Hulland, Chairman of Solihull Conservatives said; "Margaret Thatcher came to power at a time in our history when our country was going rapidly downhill, our standing in the world was diminishing and the British people had little to be proud of in this once great nation.  She had to make some very hard decisions, but turned our country around, put Britain back on the world map and made people proud to be British again.  She gave us back a future and we owe her so much."

Julian Knight, the Conservative Parliamentary Candidate for Solihull added;"Margaret Thatcher was our greatest post war prime minister. Not only was she right on the majority of major issues of her time - a rare feat indeed - she understood instinctively the aspirations of Britons and Silhillians to better themselves, their families and their communities. This country owes a great debt of thanks to Margaret Thatcher and my thoughts are with her family at this sad time."

Caroline Spelman, MP for Meriden, has joined MPs on both sides of the House in expressing her sadness at the death of Lady Thatcher, whom she met several times, giving Caroline great inspiration in her own political career.

Caroline said: “ We will mourn the passing of a great statesman who led the way to end the Cold war which overshadowed my generation as well as casting off the bad reputation of Britain as the sick man of Europe. She made me proud to be British".