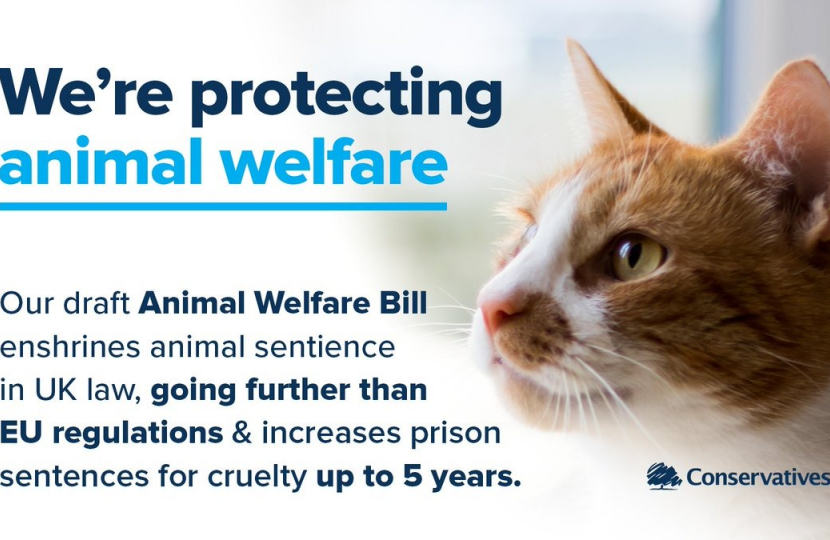 Last night I was, along with my colleagues, in Parliament until 12am, we passed various Bills one of which is of particular interest to many in Solihull - the Animal Welfare(Sentience) Bill. I am personally delighted that we, as a government, were able to make this landmark progress to help defend animals who cannot do so for themselves.

This Bill formed part of delivering the Conservative Party manifesto commitments on animal welfare, which I and all my colleagues stood on when elected in 2019, by enshrining in Law what has been demonstrated by the science for some time that animals feel both pain and pleasure and going further than ever before in protecting them.

I know how strongly the people of Solihull feel about ensuring animal welfare, from your pets at home to wild animals to those living on farms at home and abroad, and I agree.

Last night we made a crucial first step in this direction, but I am clear it went nowhere near far enough. When the facts change we must change our actions, and the scientific information has changed. Our position as a society has changed overtime on many things that were previously accepted as cultural norms, and I am hopeful that this will continue on practices which cause such terrible suffering to sentient and innocent beings such as bear baiting, dog fighting and importing the products of torture of animals and trophy hunting from abroad.

I look forward to continuing to represent my constituents’ views on animal welfare, when the Animals Abroad Bill is debated in the coming parliamentary session.